Available on most products

On orders $75 and more.
text.skipToContent text.skipToNavigation

You depend on your car to get you where you need to go, so when it doesn't start, it can be a pretty big problem. There are a number of reasons why this might happen, but one of the most common is that it isn't getting enough electricity to start the combustion process. You may be tempted to blame the battery and you might be right but alternator problems could also be at fault.

How do you know if it's the alternator or battery? Knowing the difference between their defaults will let you make a quick diagnosis and the proper repairs.

Always check the battery first, because it has a lower life expectancy (three to five years) and fails more often than the alternator. First off, switch the key to the on position without cranking the engine. Check the voltage of your battery with a voltmeter or a battery tester to see if voltage is reaching at least 12 V. Next, notice whether dome or headlights seem dim, as this indicates a low battery. Check the condition of the battery itself, noting any loose cables or crud accumulated on top. (Don't touch the crud with your bare hands).

Next, you'll need to jump-start your car with the help of a jumper pack or a friend with a running car (using jumper cables). Once you've done this, let it run for about five to 10 minutes, then disconnect the jumper cables and try to start it up on its own. If it starts just fine and continues running for another five to 10 minutes, your problem is likely a dying battery. If the battery light is appearing on your dashboard while the engine is running, the system detected a problem with the charging system and the alternator is probably the responsible.

If it doesn't start at all, this means your battery is dead. But that doesn't rule out the alternator. Take it to a professional for a final diagnosis. Or, if you are mechanically adept, try the following yourself: While the engine is running, use a multimeter to check the charge at the alternator output. Test the output at various RPMs (for example when engine is at idle speed and at 2,500 rpm). Sometimes, the regulator is faulty and the output of the alternator may be impacted with output crossing the 20-volt range! That would be the sign of a bad regulator and this can also damage the battery. If it's in the 13 to 15-volt range, your alternator is fine, and you need a new battery. 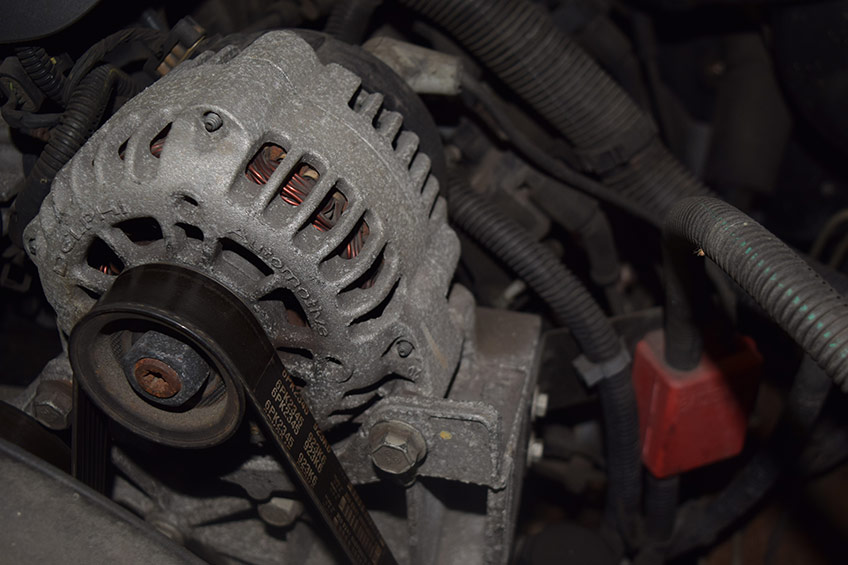 As mentioned above, if you find that your battery is low, it's a good policy to check the alternator anyway. The alternator can drain a battery over time and shorten its lifespan, and you donâ€™t want to unnecessarily run through batteries on account of a bad alternator. Basically, your battery gets the engine going, but once it's on, the alternator takes over and can, in theory, continue running the car without the battery's help. Therefore, a piece of advice that often comes up is to remove the battery's negative cable while the car is running, and see if it shuts off. While this will tell you if your alternator's good, it's also really bad advice, as it can seriously mess up your car's electrical and computer systems. If the alternator is working correctly, removing the battery from the system may cause a spike in voltage output, and possibly fry other components. Instead, observe your headlights when you try to crank the vehicle. Do they flicker? That's a sign of a bad alternator.

As an alternator has rapidly moving parts, you might also hear a noise if something is wrong. Growling suggests mechanical failure, which could be from shot bearings. Whining could just mean the belt is loose. If you smell burning or see smoke in the area, that's an electrical problem you need to address ASAP.

Stay vigilant and know the signs of a failing battery, or alternator, so you don't end up stranded. It's also critical to always make sure you address the root of the problem and not just the symptoms. Check out all the electrical system products available on NAPACanada.com or trust one of our 650 NAPA AUTOPRO service centres for routine maintenance and repairs.

For more information on problems with an alternator or battery, chat with an expert at your local NAPA Auto Parts store.